The surprising berry of the summer – watermelon

To continue the topic of exploring different kinds of fruits and berries, in this article I’d like to get to the bottom of the watermelon dilemma. Are watermelons berries? 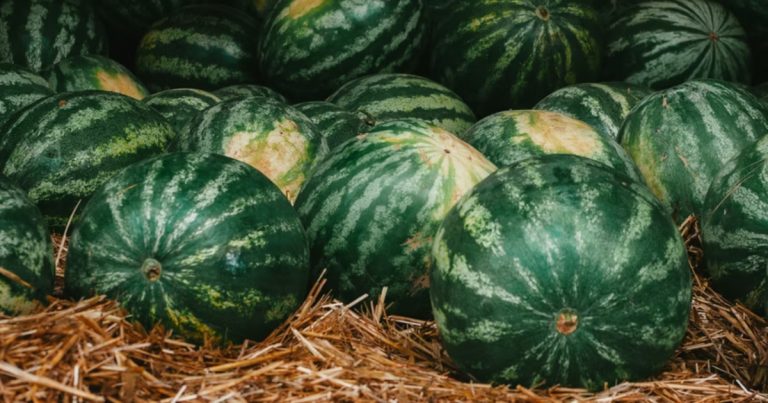 Many fruits, vegetables and berries are not what they seem, and on this blog I’ve tried to figure out many of them. Today my target is a watermelon.Surely you’d think that it is a fruit yet it is recently known to be a berry. So is watermelon actually a berry?

There are quite a few other articles written on similar matters, such as Coconut is not a nut and Pineapple – berry or fruit.

To continue the topic of exploring different kinds of fruits and berries, in this article I’d like to get to the bottom of the watermelon dilemma. Are watermelons berries?

Watermelon is considered to be an annual crop. The stem of the watermelon, like other plants of the pumpkin family, is climbing. Watermelon blooms with yellow flowers, it produces a special type of fruit – watermelons, that is, berries with a thick skin and a very soft and juicy middle.

These types of fruit are typical of the pumpkin family. Watermelons are classified as melons because, like melons, they have a smooth outer skin – green, yellow and sometimes white. And a juicy, sweet middle – usually pink, yellow, red but sometimes orange or green.

While researching watermelons, it is seen that the term of it being a fruit is used pretty commonly. That begs for a question and a hypothesis, that many people are not sure whether it is a fruit or a berry.

What makes watermelon a berry?

Despite the rather large size of watermelons, botanists do not refer to them as fruits, but as berries.

The reason is quite simple – the presence of juicy flesh with many seeds. And if absolutely accurate, then watermelon belongs to a variety of berries called pumpkin. Representatives of this variety have a fairly dense skin, succulent and softer flesh and a much larger number of seeds.

There are many varieties of these berries today. For example, in Russia the most common are considered Astrakhan, Melitopol, Atlant, Knyazhich, Rosa from the Southeast and others.

We are often used to berries being tiny, therefore it could be the reason why it is so difficult to call these huge watermelons berries. But since today we found out that pumpkins are also berries, it just starts to make more sense, doesn’t it?

Tips on choosing the ripest watermelon

Since we have answered the question whether watermelon is  a berry or not, it is time to admit that it’s one of the best snacks in the summertime. Sometimes it can be tricky to choose the ripest watermelon, so here are some tips on that.

The first rule for choosing a watermelon is to consider it and look at it from all angles. Choose a firm, symmetrical watermelon without bruises, various growths or dents.

Various uneven formations may mean that the watermelon did not receive enough water or sun to grow, so the fruit may not be juicy and sweet.

The heavier the better

Feel free to pick up the watermelon you are watching and estimate its weight.

Heavier is always better. As watermelon contains 92% water, weight is one of the factors that indicates that it is properly ripe. To choose the best – look at watermelons of about the same size, compare their weight and choose the heaviest.

Give it a little knock

Place the watermelon on a straight, flat surface and knock. Yes, it may look weird, but the key is to buy the best watermelon.

Watermelons with shiny peel should be avoided. This is an unwritten law. If the peel shines, the watermelon is either unripe or treated with a substance that you do not want to bring to your mouth.

The natural, ripe watermelon peel will be dark green and non-shiny, especially indistinct.

Hopefully you’ve enjoyed this article on the biggest berry of the summer – watermelon. Good luck choosing the best watermelon on the market!